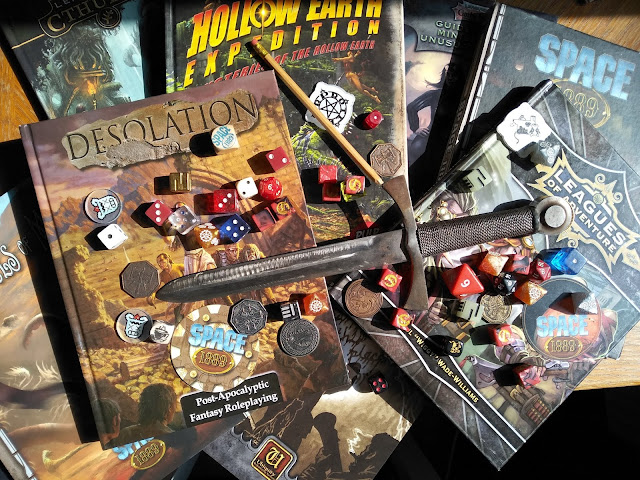 Triple Ace Games has something new added to their great portfolio of gaming goodness. Here is the text from the TAG Newsletter:

Wiggy's imagination is like a piñata - if you hit it hard enough something tasty usually falls out. In this case, it's new material for Leagues of Gothic Horror in the form of products we're calling Appendices.

Each product in the Appendix line is two to six pages (US letter size, PDF format only) in length and adds extra material for one specific aspect of the setting. Just to be clear, this isn't material that was left out of any previous books - it's all new. Finished so far are Appendices for Apparitions, Mordavia, Vampires, and Walking Dead.

The first release adds more from the works of Edgar Allan Poe. This Appendix adds Bloodline Talents (first found in Leagues of Cthulhu), allowing you to play a Pym or Usher, visit places like the House of Usher or Valley of Colored Grass, and interact with Prince Prospero, who while dead still haunts his abbey still sealed off after the Red Death.

There's no set publication pattern for the Appendices - they'll be released in the order Wiggy's brain coughed them up. Similarly, although the first batch are for Leagues of Gothic Horror, future releases will look at other aspects of the wider Leagues universe, as well as Hellfrost.
Appendix 1: Edgar Allan Poe is available to purchase at RPGNow! 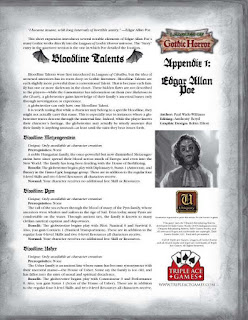 I personally love the Idea of the Bloodlines first emerged in TAG's Leagues of Cthulhu book. There are quite powerful specific Talents, which have a secret drawback, maybe a curse, only the Game Master knows. It is an special kind of horror to slowly endeavour a terrible secret about yourself and your family. Very suitable for a game in the World of Lovecraft and Poe.

The Appendix PDF is out on DriveThru for 1.99$