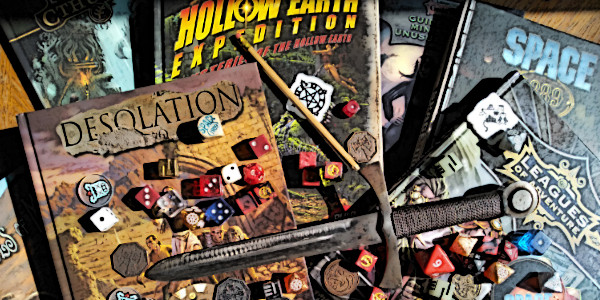 **This is the second time I post this today. The Layout was in shatters, and I was not able to find the reason...**

Greetings everybody!
I started this Blog-Project exactly 3 Months ago out of a whimp. Had the idea for a Ubiquity centered Blog some time ago. I was not sure, if there is enough content out there to keep it running, but just wanted to try it.
I can proudly say, it was a good experience so far. I have fun with this hobby, and big bonus, some people reading it too!
For the future I will try to make a News Summary every other week as a regulary update and post stuff I think is interesting and/or time-dependent whenever it comes to my mind.

But you arer not here reading my blabbering about myself, you are here for News!
Just thinking, everytime I'm out of town, it seems to be time for all the publisher to get something out there... maybe, if I get away for a longer period of time, we will hear from Exile Games again?

Another Gothic Horror-Appendix is released. This time No. 3 (I understand the way of counting neither) is about the walking Dead. Fittingly named "Guide to Walking Dead". 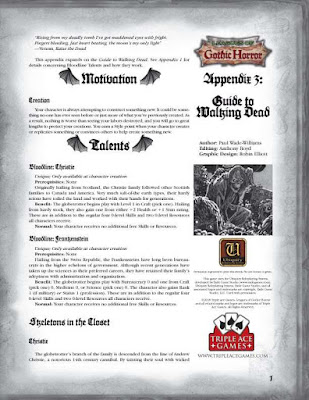 
Leagues of Gothic Horror is at Bundle of Holding. This is the best chance to expand your PDF collection of TAG Games for a real bargain. 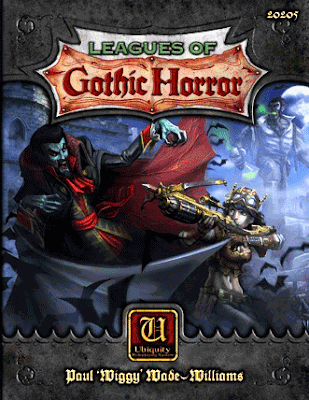 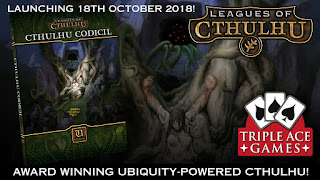 Don't forget to check out the New Kickstarter for Cthulhu Codicil starting tomorrow. This will add some cool stuff to your games and there is a whole lot of shiny merchandise to order. Which gamer ever say no to more dice?

A preview about the content:
On the eve of the launch we take a brief look at what's inside the book. You'll see that it is divided into two sections - core Mythos and the Dreamlands.

Leagues of Cthulhu Codicil
Characters: Whether your players are looking for new family lineages hiding terrible secrets, new Leagues to join, or give their characters a notable hindrance, this chapter gives them plenty of new options.
Magic & Manuscripts: As if there wasn't enough madness at characters' fingertips, this chapter includes additional rituals, tomes, and relics. Formulae, found in Mythos tomes, allow characters to create Mythos-related relics, such as Powder of ibn-Ghazi, Incense Cones, and the drug Liao.
Where Darkness Dwells: From lost cities to shrines and remote mountains to distant islands, there are another swathe of locations for characters to explore.
Gods, Monsters, and Cultists: For those Gamemasters wanting more terrors, this chapter includes new lesser gods, monsters, cults, and NPCs. Learn the secrets of the The Black Scorpion Brotherhood, the barbaric practices of the Cult of the Red Leech, and how the Mythos relates to the Viking gods.
Realm of Morpheus: The Dreamlands
What is the Dreamlands?: A brief introduction to the Dreamlands, which lie beyond the veil of sleep.
Dreamers: New options for globetrotters intent on exploring and shaping the Dreamlands.
Magic & Manuscripts: Rules for entering and shaping the Dreamlands, as well as new rituals, books, and relics.
Gazetteer of the Dreamlands: From quaint Ulthar to the great city of Celephaïs and the feared Plateau of Leng to the darkness of the Underworld, this chapter covers the many wondrous sites of the Dreamlands.
Inhabitants of the Dreamlands: A bestiary of terrible creatures, including such entities as Gugs and Hunting Horrors, insidious cults, major personalities, and the cats of Ulthar.

And a Preview of the Kickstarter Page was shared in the moment I was writing this. Take a look: Leagues of Cthulhu: Codicil 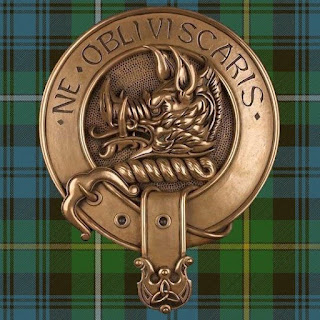 Black Campbell Entertainment working on a new book. Gateway to the East, a guide to 1930s Istanbul.

Work is moving on the Istanbul book. Intro chapter is done, and the chapter on the various groups active in the city -- NKVD, SS, and others -- is well underway. Estimated final page count on this is going to be in the same range as the Shanghai book, between 70-90 pages with at least two adventures bundled in.

A fascinating City in a time of turmoil. Sounds like a good addition for your surface world adventures! 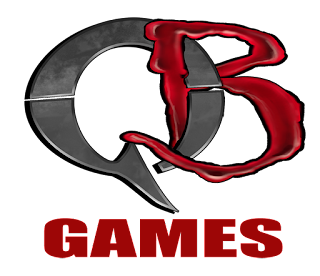 Quantum Black Games posted today on their Facebookpage, the PDF Beta of Quantum Black:Dark Designs for Kickstarter backers is good to go. It should go out within 24 hours. As one of this Backers I'm thrilled to read this!
Quatum Black Games had allowed me to present you another exclusive preview. Enjoy the report about the terrifying Lamashtu!

Quantum Black recently encountered a horror it is referring to as a Lamashtu due to its resemblance to a demonic monster from Mesopotamian mythology. The field team that encountered it believed that it entered our world through a rift into another reality created at a research facility controlled by an unknown company. Whether this rift was intentionally created is unknown. The horror’s resemblance to a mythological creature suggests that similar rifts have been created in the ancient past, perhaps connecting to a realm that gave birth to various ancient Mesopotamian myths. While in ancient times Lamashtu was considered a singular goddess, Quantum Black believes it is likely a type of creature.
The Lamashtu Quantum Black encountered in the field was an approximately 7-foot tall female humanoid, with lion-like head sporting donkey-like ears. Its long arms sported unusually long fingers and prominent, razor-like claws. It also had birdlike feet with sharp talons. Its fur and feathers cover its breasts.
The Lamashtu terrorized a rural region and a nearby urban region, abducting and eating babies, young children, and pregnant women. The Lamashtu hunted relentlessly, was almost impossible to detect, and cleverly hid the remains of the victims.
Perhaps due to its alien nature conflicting with our reality, a variety of unusual occurrences afflicted the region. People suffered from nightmares, and plants and animals sickened with unnatural speed.
Quantum Black’s occult specialists believe that Lamashtu might be able to be summoned by cultists. The statistics below are Quantum Black’s best guess at the abilities of a typical Lamashtu, though they concede that they may vary significantly.

Stats will be in the book.

The Germans did it again. An Etherzeppelin stuffed with new releases for Space:1889 entered Ubiquity-Space.
Starting with a new Adventure in English  - Murder on the Ether Express 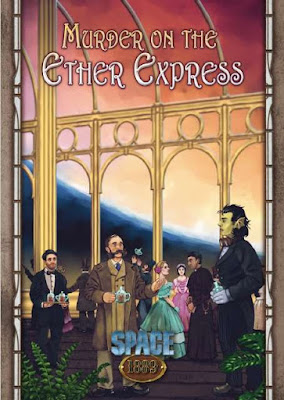 The RMS Aetheria is a marvel of modern etheric engineering capable of incredible interplanetary speeds and, if the owners are to be believed, the fastest civilian ship in the solar system. Of course, this brash claim requires proof and the adventurers have been lucky enough to secure passage on the ship’s shakedown cruise, during which the vessel and her crew will be put through their paces.

They are not alone, however. The wealthy aristocrat Montague Harrington-Hyde has commandeered the ship for one of his famous business parties where, if rumor is to be believed, fortunes are made and lost. This isn’t the only thing they need to worry about, as the competition eyes the Aetheria with jealousy, and the Tossian government sent one of their ambassadors along for the ride.

Can they navigate the world of the aristocracy and rub shoulders with the elite without causing a stir or making the front page of The Times? With sabotage, political skullduggery, and maybe a murder or two in the cards, can they even survive this ship of secrets?

Murder on the Ether Express is an adventure for a veteran Gamemaster and players who are interested in an adventure based on investigation and social interaction.

Get the 34 Pages PDF for 5$ at DriveThru

The next release is German-only at the moment. Sorry. This is not only an adventure, it is whole a (160 pages) campaign about the Phaetons, the (maybe) first and long gone ethertravelling civilisation in our solar system. Called Phaetons Vermächtnis - Am Abgrund der Zeit which means Phaethons Legacy - At the Abyss of Time. Written by the chief of the German Space:1889 department Stefan Küppers himself.
I really love this fantastic cover! 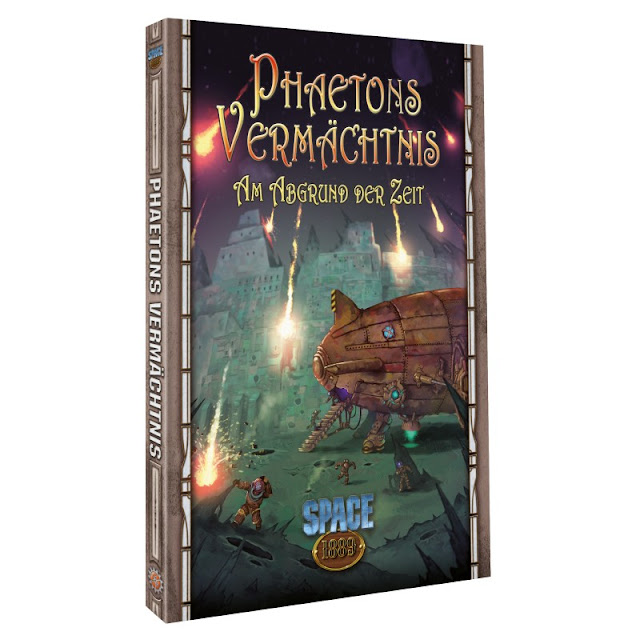 Any Mistakes? Forgot something? You want to share your stuff or release your own article here? How do you feel about a Twitteraccount for your Ubiquity-News?
Let me know!